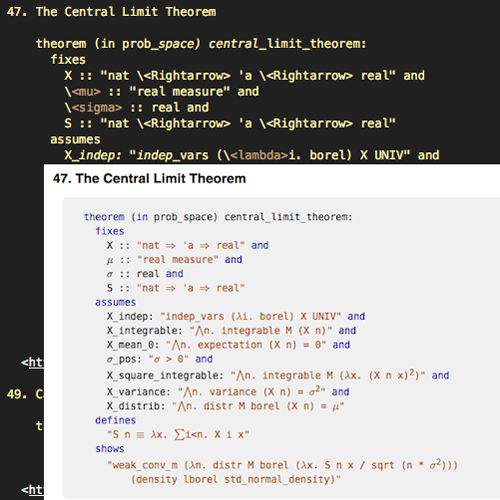 Wouldn’t it be nice to just include snippets of Isabelle code in markdown or html and have them show up rendered with symbols and highlighting?

Set your quick_and_dirty flags and read on.

You can use it together with tools like pandoc to embed Isabelle code in markdown, html, or other pandoc source languages. You can even generate RTF documents with highlighted Isabelle code and talk to people who speak MS Word.

Since pygments is fairly comfortable with Unicode, you can even just copy source from Isabelle/jEdit, including already rendered symbols, and paste it into markdown:

Cool! What do I need to do?

If the last two steps worked, you now have a working pygments install that understands Isabelle.

Now, there is a lot of choice. You could run any markdown engine that natively supports pygments, there are plenty of these. You could also run pygments directly in html generators like jekyll.

I happen to like pandoc for markdown rendering, but you first have to tell it to use pygments instead of its own syntax highlighter. Which you can do by putting something like the following into a file pygdoc.hs:

(I did say quick and dirty. Feel free to improve…). Compile it with

You don’t have to write hilite.css yourself. You can generate it with pygments for the theme you like (here default) with

With Isabelle symbols, you might not want to trust that every user’s browser and its fonts support all Unicode symbols in exactly the way Isabelle/jEdit renders them. Luckily, the Isabelle font is part of the Isabelle distribution (lib/fonts/IsabelleText.ttf), and you can just include it in your own CSS with the @font-face directive. For instance:

Github now also recognizes Isabelle syntax and performs at least rudimentary highlighting (no symbol and sub/super script support here yet). For example, have a look at the List theory on github.

The highlighting is based on a TextMate grammar definition that I maintain on github. Of course, you can also just use this bundle to highlight Isabelle files in TextMate.

If you have ideas how to implement support symbols and sub/super scripts on github, let me know. It would definitely improve readability of Isabelle sources there.

Obviously, an external highlighter like pygments will never have as much semantic information available as Isabelle itself (or any, really). The highlighting is mostly based on keywords and a few regular expressions, so don’t expect too much of it. It will passably recognize most of outer syntax, it won’t have any idea about inner syntax, type information, free or bound variables, declared constants or other semantic concepts. The idea is to increase readability a bit, not to rebuild an IDE in Python.

The inline code block support in the Haskell/pandoc filter above is a bit patchy: it expects an outer syntax entity like a definition (because pygments expects to render a .thy file), but often what you will want to mention in inline code blocks is actually a term fragment with a few symbols. In the form above, you’d have to at least sometimes include string quotes to indicate that pygments should render inner syntax (mostly just symbols). You could tweak the Haskell code to do that automatically for you if that is something that occurs frequently in your text.

The highlighter also renders RTF, LaTeX and other formats. RTF works surprisingly well. LaTeX support is less stellar (no sybmols at the moment), but for LaTeX you should use Isabelle’s excellent builtin antiquotations and formally checked sources for document generation anyway.

Feedback and improvements are welcome.