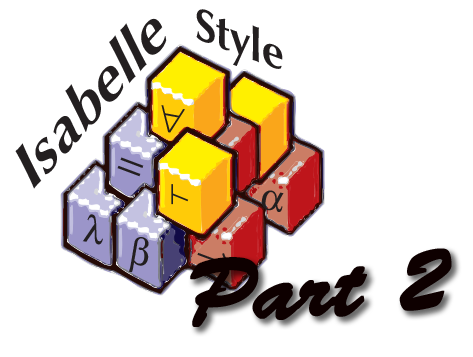 With examples and rationale.

This is Part 2 of my personal style guide for Isabelle/HOL. Part 1 was about the essentials. Part 2 is about good style and advanced rules that may not always apply, but will be beneficial when they do. Part 3 will be about layout and looks.

Thanks for all the positive feedback on Part 1! I hope you will as much fun with Part 2.

This third set of rules in the Isabelle style guide is about things that will make your proofs nicer. If you can follow them you should, but it may not always be feasible to do so. Some of these are for advanced uses of Isabelle.

This concludes Part 2 of my style guide for Isabelle/HOL.

As with Part 1, if you have feedback, strong opinions, or just liked what you read, get in touch by email or if you think it is of wider interest, on the isabelle-users mailing list (subscribe here).

Part 1 has seen some updates based on feedback. I might do the same for Part 2.